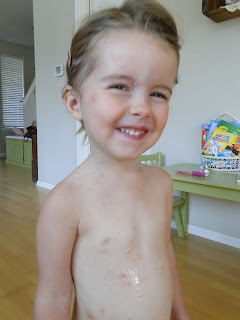 poor girl came down with the chickenpox this past week. whew, fun times! it started with one fluid-filled blister on her belly and i had NO idea what it was. by that afternoon, i noticed that her appetite was pretty much gone and she was exhausted. i put her down for a nap an hour early and she slept for 2.5 hours. when she woke the poor thing had a 103.2 fever. of course, we knew something was wrong. after a very rough night of hot sleep for her, i was able to take her in to the doctor the next morning. she had a few more blisters and was still HOT. he wasn't exactly certain what it was just yet....chickenpox or some strange strain of impetigo since i had just recovered from an outbreak. he loaded us up with some home remedies and strict instructions to keep him informed 2x a day about the development of her illness. after an email from mark's cousin claiming that her daughter broke out w/the chickenpox that same day, i was certain that was it (since we just spent an entire week on the east coast together!). thursday was another warm day for vienne, while her body produced more and more blisters. by friday, the storm of it all hit. HARD. new crops of sores had developed on her arms and legs and scalp and by noon she was in PAIN. never itchy this whole time....just sheer pain on each sore developed. It. Was. Horrible. as it quickly progressed, i couldn't touch her one bit. she wouldn't wear clothes, i couldn't hold her, caress her, or even set her on a chair. she was so upset that she refused any kind of medicine, topically or orally. i thought the oatmeal bath might soothe it but standing in it, made her scream. i eventually got her in a loose pair of soft undies and made a very soft cushion area on her bed to sit against. she sat in bed, sucked on a homemade popsicle and watched a movie...calming down.

we have found an INCREDIBLE doctor - naturopath/chiropractor. dr. chris. he would quickly respond to every update email i sent him. i had sent him one that morning of the painful sores, informing him that she had had a very rough night of sleep (we weren't aware of her pain yet since she was so deliriously tired). once he read that email, learning that things had changed slightly for the worse, he wanted to talk on the phone immediately. by the time i called him, that's about the same time her intense pain had set in. he was concerned and asked a TON of questions, trying to determine the correct homeopathic remedy. he wanted her to have it right away, so offered to make himself available at his next clinic that day, closer to our home. mark ran over and retrieved it. Antimonium Crudum. The Life Saver. after just 20 minutes of giving her a dose, she made a huge 180 turn around. just like that!! the pain was subsided, she was cheery and running around w/energy again...just like the little girl we know.
by the next day, everything seemed back to normal...except she just had chickenpox bumps all over. the itchies set it (mildly) though no more new crops popped up. over the next few days the slight itchies completely subsided and the sores started to scab over. quick!!
i was actually afraid that it was too quick! i emailed dr. chris my concern - why weren't more spots forming, as is typical of the chickenpox? why weren't they itching her to death? did enough blisters form to warrant chickenpox?...she was covered, but definitely not in 300 like the literature claims. but he sent me a very encouraging email that gave me such confidence in the choices we have made to do everything naturally for her! he said that once we found the right remedy for her, it helped her body to turn everything around while boosting her immune system. in his experience, along w/200 yrs. of documented literature, it has been discovered that with the right remedy the child is able to move through the illness more easily and recover more quickly, all with a stronger immune system and not one return or renewed susceptibility to the epidemic. how triumphant i feel that we suffered through just one very rough day and then were able to turn what was proving to be a difficult case into a very mild one ... all with natural remedies! God's medicine certainly is the BEST!
Here's a list of what we did...just so that I can look back and remember when we have to go through it again with child #2!
-Children's Glycerite - for the immune system.
-Vitamin A - an anti-viral. Started w/a high dose of 10 drops first day, down to 5 drops the 2nd and 3 drops the next two.
-Pulsatilla homeopathic remedy - this is Vienne's constitutional remedy. Our next child might need something different.
-Antimonium Crudum - for the pain and severe mood changes/irritability. Initial dose was 2 pellets. Then we followed up, on need only basis, with a dilution of this remedy.
-Raw honey on the sores for about 30 minutes.
-Oatmeal baths, which also washed the honey off.
-Made a homemade natural version of "Calamine Lotion", using the leftover oatmeal goo mixed w/baking soda.
-Aloe vera was also soothing
-Constitutional hydrotherapy for the fever.
-Bone broth soup and homemade organic juice popsicles for sores in the mouth.

And, if anyone else happens to stumble across this blog, I hope this helps for it was miraculous for us!!
Posted by For Vienne at 3:48 PM 1 comment: