I realize the only time that I ever feel compelled to write (in these current days) is when I am not doing so well.  I don't want this blog to be a "woe is me, negative Nelly" outpouring…geesh, what a drag!  But, I have to remind myself over and over that this blog is not for anyone but for me and for Vienne.  And, during this stage of my grief journey, if I only feel compelled to write when I am down and struggling….well, then so be it.  Right?  No one has to read it anyway.  I just need an outlet.  Mostly because I don't open up and pour out to anyone these days.

So….all that to say….this September has been rough.  Man, I was just not expecting it at all either.  I mean, I know that the anniversary time is supposed to be hard but I figured that with my ability to find distraction and be numb that I would just breeze through this period.  In reality, I've had hang ups left and right.  Or so it seems.  You know…when like 2 things go wrong, it really feels like everything is going wrong?  Yeah, that's probably more close to the truth.  But, I really have felt like there's been a struggle each week of this month.

1.  After all that awesome kickboxing that I boasted about in my last post…it all came to a stop with a neck injury from so much impact.  Obviously, kickboxing and martial arts are about impact…even though we don't really "hit" each other, we do hit the bags and strike pads.  The impact of my punches reverberated right down my arm to my neck and caused some pretty extreme pain.  I tried seeing my chiropractor and getting a massage while still continuing in class…but it was only to my detriment.  Things continued to get worse and worse until finally my doctor said that I need to take at least a month off to let my neck heal.  Boo.  The injury and the frustration were a literal pain in the neck!  Pun intended!

2.  Ivy had a cough for a month straight.  We eventually thought it was allergy related asthma because it only occurred while she slept.  We got her tested for all allergies only to receive clear results - no allergies.  Good news….but frustrating as we never figured out what that was all about.  The coughing has finally ceased…but it was a stressful and sleepless 4 weeks!

3.  The week after the 2 year anniversary of Vienne's passing, I received some hugely terrible terrible tragic news.  My sister in law, Kinsey (the one who takes all of our gorgeous photos) has a best girl friend named Davy.  Davy has 2 beautiful little girls and has been drawn to me ever since I lost Vienne.  She has been a dedicated follower of this blog and has written compassionate and heartfelt messages to me, from time to time.  Having 2 girls whom she is so desperately in love with, she has struggled in imagining what I have gone through.  Her heart has been severely broken for me.  I have grown to love her as an internet friend.  Well, all that to lead up to share this….Davy and her husband, Jake, received the most awful news regarding their younger daughter, Magnolia who is 3.  Magnolia (Maggie) was diagnosed with inoperable terminal brain cancer and given 9-12 months to live.  Oh I cannot even type it, still, without crying.  Horrible awful unimaginable.  My heart shattered for her.  Over these past 2 years she has watched me go through her worst nightmare imaginable….and now she is starting to have to face it herself.  I have been a wreck ever since I found out.  You can follow their page to pray for Maggie on FB - "Pray for Magnolia".  They are currently doing daily radiation sessions.

4.  Then 2 weeks ago, I was scheduled to go on my church's women's retreat.  My first solo time away in 3 whole years!  Mark has been nudging and encouraging me to take some time away ever since I weaned Ivy.  This was it.  I was looking forward to a relaxing weekend of quiet time and sweet fellowship with ladies that I love.  And a day before the retreat I started to get a fever…chills and sweats and aches…the whole thing.  It would come and go and seem to be eased by ibuprofen so when Friday rolled around for the retreat, I thought I was in the clear to go.  I went and stayed one miserable night, plowed through the day, and finally in a teeth-chattering full body shaking mess, gave in to logic and packed up and went home.  The fever turned into something awful….that lasted 9 whole days!  I came down with the strangest worst virus I have ever faced….but the doctors could not exactly name what it was.  By Monday, my fever spiked to 104.6 and Mark had to take me to the ER - for a 9 hour stint.  Blood tests and chest x-ray revealed nothing.  But I had swollen lymph nodes, swollen salivary glands (on my cheeks, by my ears!  WEIRD!), tight chest pain and difficulty breathing, a cough, no appetite, and of course the nasty fever that lasted 9 days.  I was in bed for 6 days straight.  Then after the fever broke and I started to recover, I developed a strange condition called ITP as a result of my viral infection.  The ITP has to do with low platelet count (which I had) - causing bruising that covered my entire lower legs as well as pain and tenderness in my feet bones.  It was the strangest thing I've ever experienced.  It took me a full week to recover and gain strength back.  Thankfully, this week I am much much better and feeling like myself again.  Phew!! 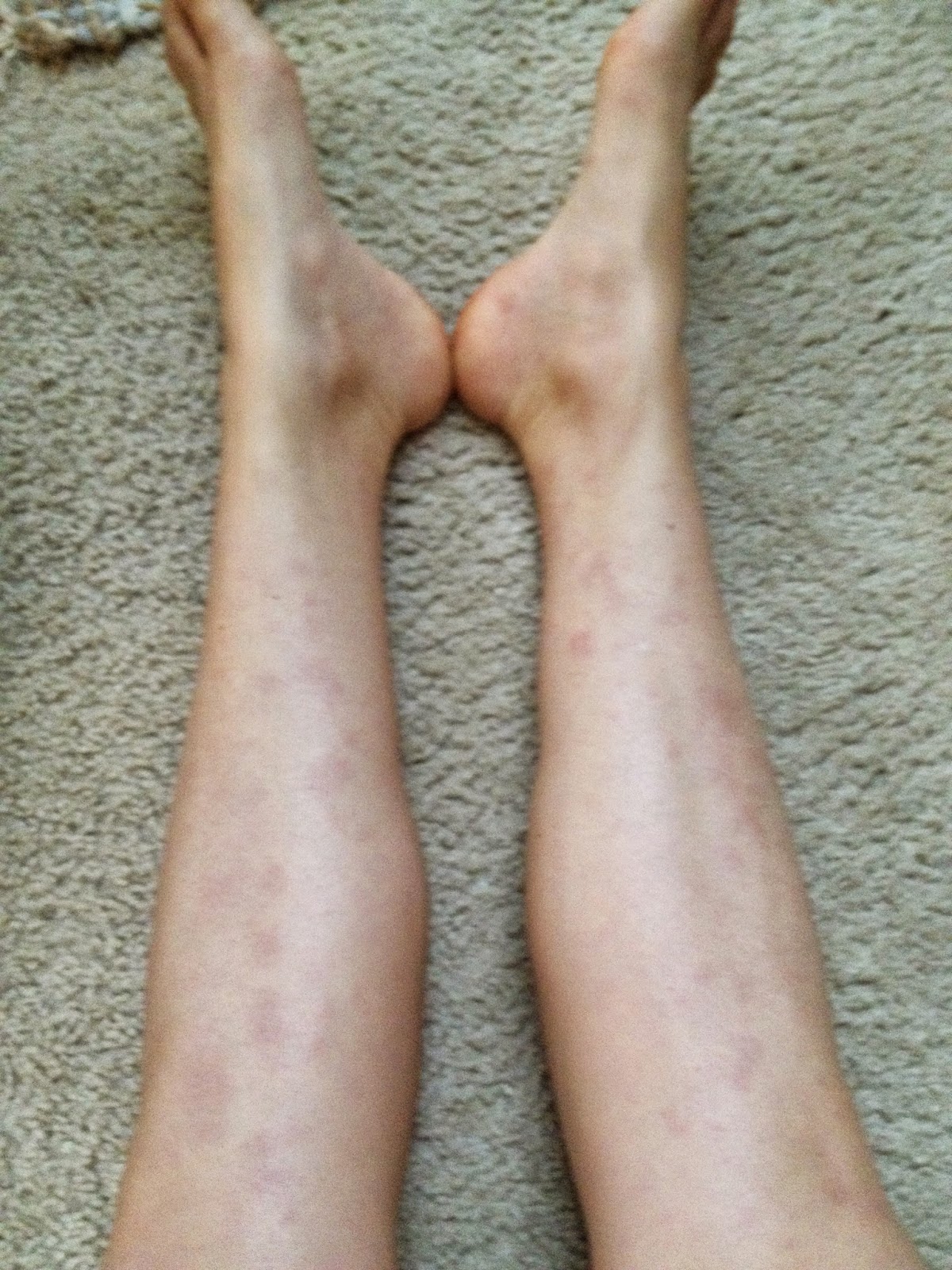 (this picture doesn't do the bruising justice…it was gross looking and each and every spot HURT.  I had at first thought it was a rash until I realized how tender each one was and that they were browning, like a bruise.  So bizarre!)


5.  Relationships and friendships are hard and currently challenging.  I'll leave it at that.

6.  I decided to join a Grief Share group in lieu of counseling.  My first session was last night.  Man, it is going to be hard!  It definitely drudges up emotions that I daily strive to keep buried.  I spent the entire time just trying to keep my emotional shit together and not lose it.  Of course, I am the only one who has lost a child.  I've called around and could not even find a group with someone whose lost a child.  That's how freaking rare it is!!  The group is full of older people who have lost parents…or a spouse.  So hard to relate to that.  I didn't speak up much at all last night.  But I did notice that the few times I did, there was certainly a hushed heaviness about the room.  I think they all acknowledged the gravity of my loss.  I mean, because come on….we're all going to lose our parents.  It's inevitable.  Of course it will be hard.  I canNOT imagine losing my Mom.  I will be devastated.  But nothing will ever compare to losing a child.  Ever.  But I will keep going.  At least these people know about loss…many of the counselors I've seen do not.  We shall see how it goes.  (And, we decided to just let me go alone because I think I might open up more with a group of strangers than if Mark is there and he doesn't feel quite ready to join.)

So.  Yeah.  That's been my shitty month.  I think all of this has contributed to me being especially sensitive and weepy this whole month.  If I am alone at night, I have been crying without fail, each time.  Crying without stopping until I finally go to sleep….waking with puffy crusted eyes.  That is so unlike me.

On a sweeter note to end this pathetic post, I want to share a beautiful gift that we received on the anniversary day.  We have a close friend who is a professional artist - Donald Masterson (look him up - his work is fabulous).  A year and a half ago, we had asked him if he would paint a picture of Vienne for us….using her ashes in the paint.  It turned out to be the hardest piece of work he's ever done and that is why it took him so long.  But I love knowing that this piece was painted through his tender tears…He was Uncle Donny to our Vienne.  She loved him so.

Here is what he created.  Isn't is wonderful? 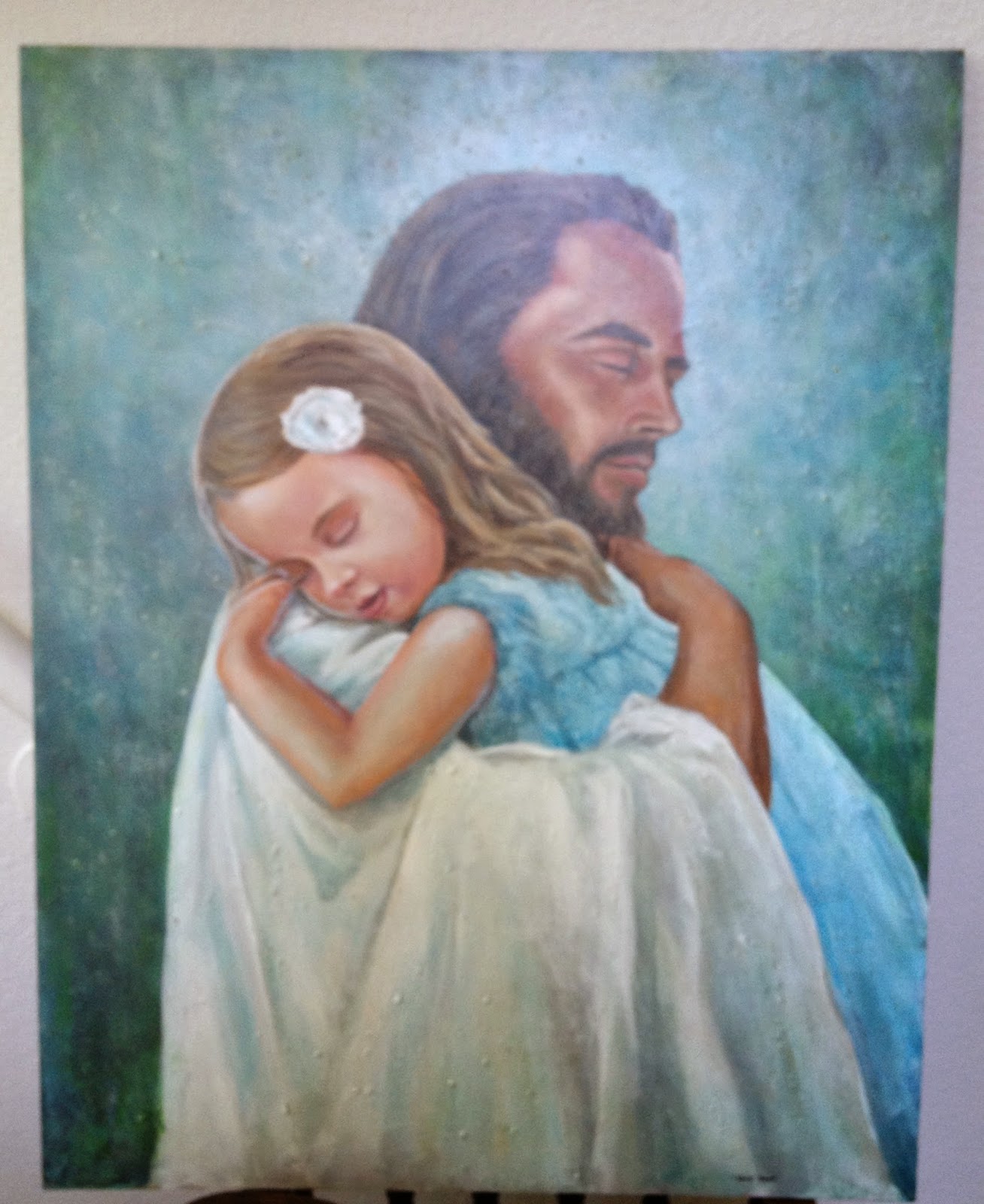 (It is a re-creation of a piece that someone had found for us a year and a half ago.  The original is the same Jesus holding a little girl who looked very similar to Vienne.  We thought it would be special to have Vienne actually painted in her place.  Donny obviously used Vienne's favorite colors.  The whole piece is textured with her ashes.  It measures about 24x30.  It is signed "Uncle Donny" at the bottom.

We are not people who normally like religious artwork…at all…so it took me a day to grow used to it.  But now I love it.  We had decided to do this because we thought it would be good to have a visible reminder of where Vienne is and how safe she is…and I am very glad we did.  I look at it and kiss her face each day.)